The Panama City Police Department used their tip411 alerting capability to send a thank you to residents and inform them that an anonymous tip sent to police helped them arrest 4 people with active warrants as well as possession of drugs and weapons. 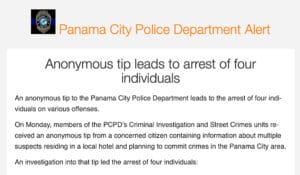 A tip to Atlantic City’s anonymous texting system led to drugs, guns and five arrests.
Thursday morning, police received texts from an unknown person to tip411 that handguns were inside a room at the Madison Hotel, Sgt. Kevin Fair said.

That sparked an investigation by Detective Ermindo Marsini at the hotel on the beach block of Dr. Martin Luther King Boulevard.

He didn’t get far, and had heroin on him, according to the charges, which include possession with intent to distribute and obstruction of justice.

In an apartment inside the Madison, police arrested four teenagers, Fair said.

Omar Law, 18, of Atlantic City and a 17-year-old Mays Landing girl were charged with drug possession. The girl also was charged with possession of drug paraphernalia.

A 16-year-old boy, also from Mays Landing, was found in possession of a loaded handgun magazine.

Detectives also found a loaded handgun inside the apartment. That will be sent to the

Detectives recovered 110 individual bags of heroin and 25 grams of marijuana in total.

Tip411 allows people to have an anonymous conversation with police by texting tip411 (847411) beginning with ACPD.

The Washington County Sheriff’s Office is partnering with Healthy Acadia to launch a new mobile app, WashingtonCo Sheriff, which allows residents of Washington County to anonymously notify law enforcement about underage drinking and illegal drug use.

A press release from Healthy Acadia states users of WashingtonCo Sheriff can submit tips directly from their smartphone via an anonymous text. Tipsters are encouraged to provide specific details about the location of the violation and the people involved, if possible. The tipster’s name and telephone number will remain completely anonymous.

They said the app is available for both iPhone and Android users and can be downloaded for free via the Google Play Store and iTunes App Store.

The sheriff’s office said residents in Washington County without a smartphone may still send an anonymous tip via text message to the Washington County Sheriff’s Office by texting the keyword WCSO and their message/tip to 847411 (tip411) from their cell phone.

Those without access to a cell phone may submit an anonymous tip online using the form found here: https://www.tip411.com/tips/new?alert_group_id=21864.

Ansonia police announced the arrest of two 17-year-old males Tuesday who allegedly caused $1,500 in damage to the soccer field at the Ansonia Nature Center.

Both suspects were charged with first-degree criminal mischief. They’ll appear in closed-doors hearings in juvenile court in Waterbury. They were arrested March 2.

“Information received through the Tip411 program and social media led to the identity of the suspects and several witnesses,” police said in a prepared statement. “All Ansonia residents are encouraged to sign up for Tip411, it is a program that allows people to leave anonymous tips and complaints with the police department as well as receive notifications from the police department.”

Three days after the arrest police were called to investigate a separate vandalism incident, this time at Abe Stone Park on Colony Street.

Police said a motorbike and a truck drove on the soccer field there.

“The vandalism is believed to have occurred over the last two days as the tire tracks are in the recent snow. The Ansonia Police Department is asking anyone with information to please call 203-735-1885. Information can also be left on Tip411,” police said.

An anonymous text led to two arrests and the recovery of a gun and drugs, Atlantic City police said.

Jorge Herrera, 18, of Atlantic City, had a loaded handgun and marijuana when police arrested him after witnessing a drug deal Wednesday, Sgt. Kevin Fair said.

A text about drug sales to the city’s tip411 anonymous texting service led Detectives Will Herrerias and Jeffereson Rivera to the 2300 of Arctic Avenue, where they saw Herrara and another man in a drug deal, according to the report.

Jose Diaz, 38, of Atlantic City, left in a vehicle and was immediately stopped and taken into custody after he was found in possession of marijuana, Fair said.

The detectives then saw Herrera leaving a residence and took him into custody.

He was found in possession of a handgun loaded with hollow-point ammunition, marijuana and drug paraphernalia, Fair said. A search of his residence turned up more marijuana for a total of 210 grams.

They also recovered a scale, baggies and $503 in cash.

Diaz was charged with possession and released on a summons.

Click here to see the alert from Atlantic City Police