To keep the Wilmington, NC community safe and provide a convenient way to communicate with residents, the Wilmington Police Department has been adopting more technology-based platforms over the past few years, including their tip411 mobile app. 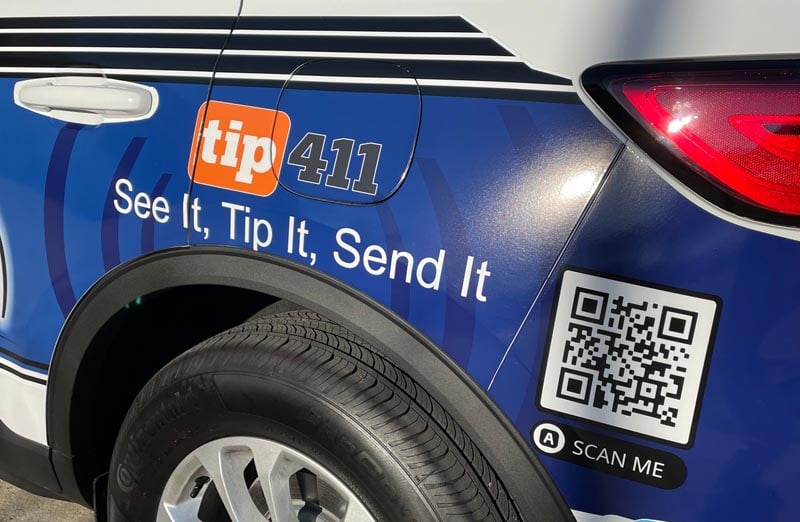 This includes the recent launch of the Mobile News/Public Information Officer (PIO) units, which are SUVs branded with QR codes for people to scan and download the Wilmington PD mobile app, developed by tip411, to submit anonymous tips. The goal of the units is to increase the visibility of PIOs at police crime scenes and encourage the community to send tips.

“We are always looking for new ways to engage the public and to increase our visibility. The SUVs allow us to be easily identified by local media outlets at crime scenes and are also a great tool to use at community events,” said Brandon Shope, communications specialist with the Wilmington Police Department.

“Our officers work daily to keep our community safe. As technology evolves, so do we,” he said. “We wanted to provide citizens with an alternative method to sending in tips anonymously.”

The text-a-tip program has evolved into the Wilmington NC PD app, which WPD launched in November 2020. The application, available for download for free on the Apple App Store and Google Play, allows users to submit tips, receive crime alerts and other community information and view WPD’s social media and online content. Residents can still submit anonymous tips via text by sending the keyword WPDNC with the tip to 847411.

Through the app, users can submit a tip using their location and attach a photo or video as well as customize alerts. Another feature of the app is that it uses technology to remove any identifying information on the sender. 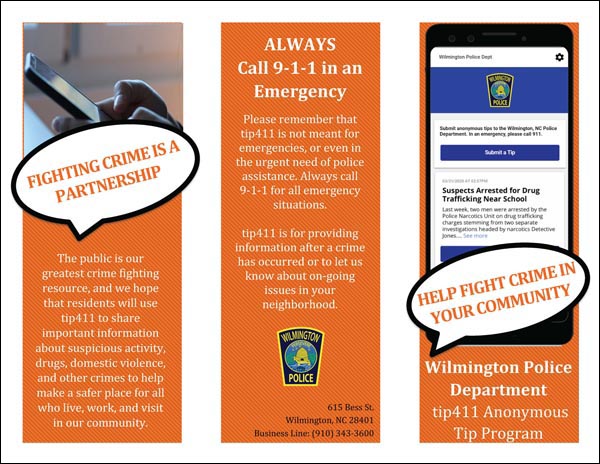 “We do not see who sends us the tips; all of that information is scrubbed completely,” Shope said. “Our STING Center is able to communicate with the tipster directly in a 100% anonymous way.”

Shope said many community members have downloaded the app and it has assisted the police department with solving crimes through the years, such as larcenies, hit-and-runs and homicides.

The app is designed to help residents connect with the police to find information, view alerts, and submit anonymous crime tips from their smartphones.

“The mission of the Georgetown Police Department is to provide our community and those traveling within, a safe and secure environment through progressive, professional police services,” said GPD Chief Michael D. Bosse. “I believe our new tip411 system will help us better partner with our community to make Georgetown the best place to live and raise a family.”

The Georgetown KY PD app is available for free download via the Google Play Store or the Apple App Store.

Individuals can send anonymous text tips to Georgetown police via text message by texting the keyword TIPGPD followed by their message/tip to 847411.

“After receiving information about the suspect’s involvement in drug sales in Asheville, including tips from the tip411 app, our officers were able to use that information to make the arrest,” said Chief David Zack, Asheville Police Department. “This is a significant drug arrest which removes a large amount of this deadly drug from our streets, much in thanks to the support we receive from the community sharing your tips.”

Asheville PD’s drug bust seized 1.25 kilograms of suspected fentanyl, equating to 625,190 lethal doses. According to the CDC, synthetic opioids (like fentanyl) are the primary driver of overdose deaths in the United States.

The Asheville PD mobile app app enables the public to share an anonymous tip with police and lets officers respond to create an anonymous two-way conversation. The app is available for download for free via the Google Play Store and the iPhone App Store.

Citizens can also submit a tip to the Asheville PD by texting the keyword TIP2APD and sending their message/tip to 847411.

Peoria, IL Police say their new Peoria PD mobile app, developed by tip411, is working to help solve crimes. The app was launched in January 2022 and police say it is already leading to arrests.

After a record year of homicides in 2021, Peoria Police say they are looking to fill a void in how they communicate with tipsters. It’s already making an impact. Assistant Police Chief Brad Dixon says they are receiving two to three tips a day.

“It’s led to arrests we’ve been looking to make for some time,” said Dixon. “The ability to be able to respond to the tipster anonymously has been hugely beneficial for us.”

“We have several administrators in the department that get the tip,” Dixon continued, “You can’t see who the tip is from, it’s just the information.”

The app is already making impressions in the community. “I would download and use it,” Peoria resident, Brandon Mackey, continued, “I think anything that can be down to head off all the crime that’s going on around this town, is a worthwhile measure.”

The Peoria PD tip411 mobile app is available for free via the Apple App Store and Google Play Store.

The Elyria, OH Police Department is increasing its crime-fighting arsenal with the TipElyria mobile app, developer by tip411, to help residents connect with the department to find information, view alerts and submit anonymous tips from their smartphone.

“The city of Elyria Police Department’s mission is to provide professional police services for the city in partnership with the community,” said Elyria PD Chief Bill Pelko. “In Elyria, we believe we can do more by working together, and our new tip411 system will help make it easier for our community to partner with us to make Elyria a safer place to live, work and visit.”

The app enables the public to share an anonymous tip with police and lets officers respond to create an anonymous two-way conversation. The TipElyria app is available for download for free via the Google Play Store and the iPhone App Store.

Citizens can also submit a tip to the Elyria PD by texting the keyword TIPELYRIA and sending their message/tip to 847411.