In a day when technology reigns, the Inver Grove Heights Police Department decided to turn to the devices that are almost always attached to people’s hands to help fight crime.

The department announced via its Facebook page Nov. 7 it will utilize Tip411, a program that allows folks to submit tips the way many communicate most — via text message.

Chief Paul Schnell said the program has been around for a number of years and is used by agencies in Minnesota and across the country.

“We know simply that we have a texting culture and people want to provide information, but one of the things that keeps some people from reporting or calling or providing information is the fact that they’re concerned about their anonymity,” he said.

Tip411 allows people to send texts that get filtered through an automated system. Schnell said the department doesn’t know who sent the tip — it can be text or a picture — and the system allows the department to communicate back to the tipster.

The day the post was made about the new feature, Schnell said the department received a useful tip through it. Someone let police know about a dump truck that was stolen from a business on Concord Street. The truck had also pulled down wires.

The department was able to communicate back with the tipster and verify the information. The tipster, however, never had to identify themself.

Tip411 is a product of St. Paul-based Citizen Observer. Schnell said he has used the system in other communities like Hastings and Maplewood, where it helped the department identify a homicide suspect and solve the case.

Use in the schools

Schnell said ISD 199 is also launching the Tip411 program, with the aim of improving school safety at the middle and high schools.

Superintendent Dave Bernhardson said the program was brought to the school’s attention by Schnell.

“Once we had that dialogue, we felt it was a very, very good opportunity for both of us to partner to get great information and obtain information from our kids, when needed,” said Bernhardson.

He said the district hopes students use the new tool as a safe space to communicate with officials about things that are concerning them.

“There seems, I guess we’ll find out, an unlimited amount of things that they can communicate, because in the end we want to make sure everything is as safe as possible for our kids,” Bernhardson said.

Schnell said Tip411 could be a mechanism for someone to report if they know of another student bringing a weapon to school. It could also be used for other things like reporting bullying or a student worried about another student talking about suicide.

“Ultimately, what it does is help create a safer school environment by getting good information to administrators to vet and sort through, and ultimately identify solutions,” Schnell said.

Bernhardson added any information gleaned over Tip411 would need to be confirmed, so he sees it as no different than other means of communication.

Read the full story from LillieNews.com

During a search of a vehicle, investigators found a pound of hydroponic marijuana, 21 grams of cocaine and a gram of the prescription drug Adderall, officials said.

Read the full story from the El Paso Times

This year’s IACP was our most successful event ever! We met with dozens of customers, old and new, and had conversations with departments from across the country interested in learning about how they could use tip411 to better connect with their communities to help fight crime.

All those who stopped by our booth were entered for a chance to win a GoPro camera to help their department produce videos in their community, and this year’s winner was the City of Tigard, Oregon Police Department!

Congratulations to Commander Robert Rogers and the whole department on your new toy. 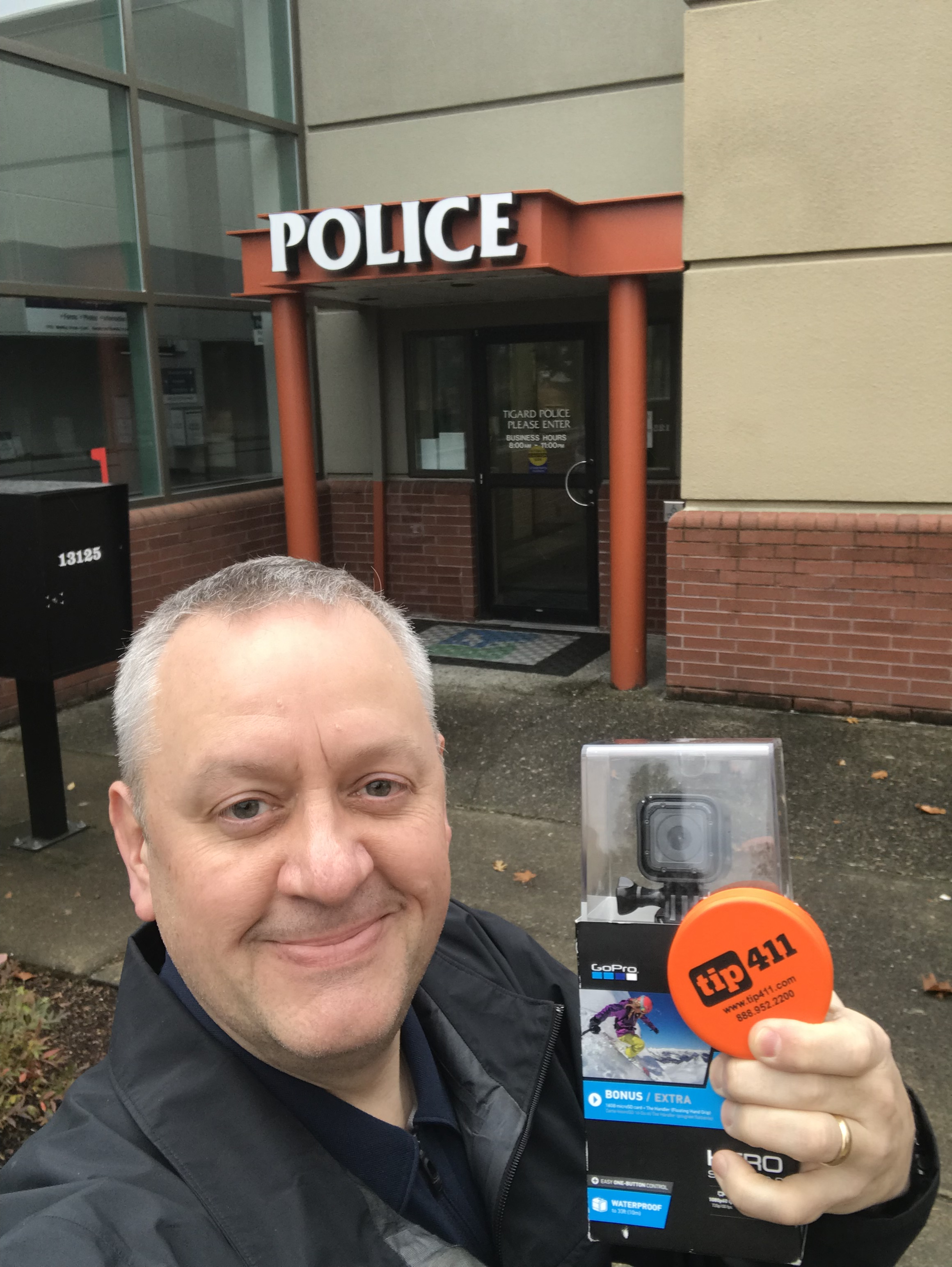 We had a great time at the International Association of Chiefs of Police (IACP) Conference in Philadelphia!

As always, it was great to meet old and new customers and talk to them about tip411 Basic, Bundle, and Pro, how they could benefit from our system, and the successes departments (large and small) are having with tip411 across the country.

This year we had more people stop by our booth than ever before to learn about what we offer, demo our products, and learn about new functionality like tip411 Select that will allow users of our apps to select the language that they want the app to use both for displaying information and submitting tips.

Didn’t make it to IACP this year or have time to talk with us? Click here to schedule a quick demo with a member of our team tp bring our tip411 anonymous tip technology to your community to better engage your residents to help fight crime.

Smartphone apps have uses ranging from checking the weather to watching movies to reading about the latest breaking news, and everything in between. Now Crow Wing County residents can download an app that lets them send crime tips to the sheriff’s department and communicate with local law enforcement from anywhere while remaining anonymous.

Tip411 is a program that has been gaining popularity in the lakes area over the last eight months. After downloading the CWCS Mobile app on an iPhone or Android device, users can simply submit anonymous tips relating to any criminal or suspicious activity directly to the Crow Wing County Sheriff’s Office.

And that’s not all.

“The cool thing with this feature is people can still remain anonymous if they wish, but we’re allowed to communicate back with them. So that’s where we can add the additional questions,” said Capt. Scott Goddard, of the Crow Wing County Sheriff’s Office.

The app allows the investigator receiving the tips to respond to the tipster and ask follow-up questions.

“They’ll text us in something very vague, like, ‘Vehicles coming or going late at night from a residence,'” Goddard said. “And then our follow-up questions might be, ‘Well, can you give us descriptions of the vehicle?’ or ‘What times are the vehicles coming and going?'”

Read the full story from the Pineandlakes Echo Journal