After four days on the run from walking away from a Department of Corrections Community Release Center, Panama City Police announced via an alert sent to their community using tip411, that an escaped fugitive was captured Wednesday afternoon.

Panama City Police said, “The Panama City Police Department would like to thank members of the community for tips that led to apprehension in this case, as well as the members of the United States Marshal Service Florida Regional Fugitive Task Force, the Bay County Sheriff’s Office and the Lynn Haven Police Department for their assistance in this case.”

Click here to learn more about community alerts and our other features. 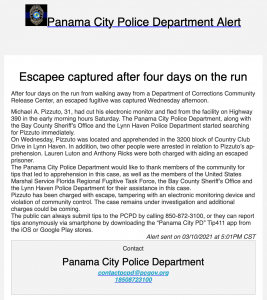