Q: Tell us about Clearwater and your department (how many residents, how many sworn, etc.).
A:Clearwater is a City of about 110,000 residents that spans approximately 25 square miles on Florida’s Gulf Coast in the state’s most populous county, Pinellas. It is the third largest city in the Tampa Bay area and it is a unique city with three separate geographic districts; each district presents its own unique challenges. – The East District is a mostly suburban, residential area with significant shopping and commuter activity. Our West District encompasses our downtown core, a major regional hospital, and other business entities. Our Beach District comprises Clearwater Beach, which is a nationally and internationally known tourist destination, which has been ranked “Best Beach in the United States” several times, as well as the “best Place to Watch a Sunset” in the United States.

The Clearwater Police Department is a mid-size department of 238 sworn officers. As a full service law enforcement agency, we deal with many of the same challenges as much larger cities. We have the added challenge of being host to a significant tourist and Spring Break/Spring Training population visiting our City.  With this influx of visitors and non-residents, as well as people crossing jurisdictional lines frequently and not necessarily knowing it in this small, but populated county, we needed a way for citizens, residents, and business owners to contact us in a manner that is convenient, effective, and cost efficient.

Q: How is tip411 administered in your department department (responsibilities, protocols, etc.)?
A:Initially we started with just tip functionality only. When we launched with tip411 in 2010 we simultaneously began a CompStat program, which was formulated through a centralized Crime Analysis Unit. So, at first, the Crime Analysis Unit and I were the main administrators of the program. When tips came in we would farm them out to patrol, narcotics, etc.

As the popularity of the system grew, we realized there was a need for 24/7 coverage because we wanted to make sure people weren’t texting us tips and then waiting for a response to come during normal business hours. We made a decision as an organization that we wanted give virtual real time feedback to any received tips. That’s when we gave additional responsibility to our Communications Center Supervisors to monitor the system after hours and respond to tips when needed, while the Crime Analysis Unit remains in charge of responding to tips during business hours and cataloging and assigning each received tip.

Our Crime Analysis Unit logs every tip we receive, which has helped us track and report the types of tips we receive, who they are assigned to, and the impact and success of tip411 to our Chief of Police. 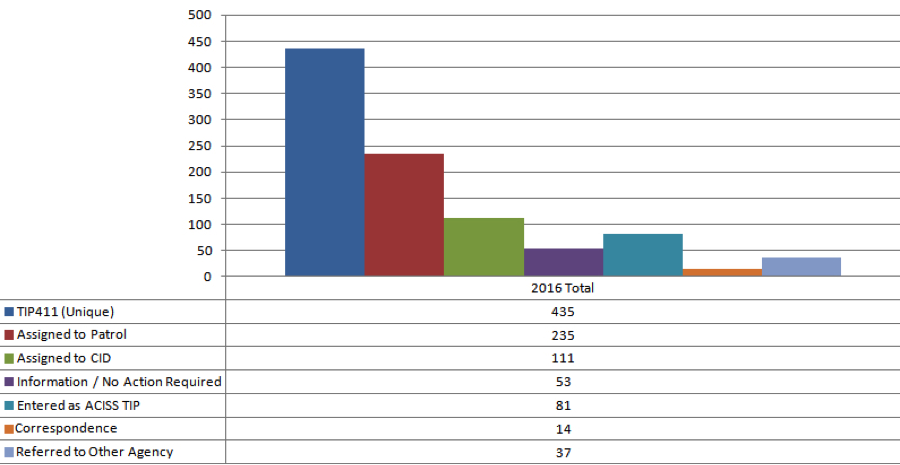 Q: How has the tip411 system aided your department?
A:From our perspective, it’s a critical and essential tool. I can’t think of another mechanism that gets people to freely engage directly with our Department and give us information on a variety of crimes and problems in their community.

In the past, we may have gotten narcotics tips from residents who were inclined to contact us anyway, but we were missing out on those residents who thought they saw something suspicious or unusual, but didn’t really know who to contact. tip411 helps us with a citywide approach where we’re able to reach across populations, demographics, across crime types, and that’s a huge benefit. In this day and age, virtually everyone has a cellular phone or access to the internet, so it can reach a multitude of populations.

We started off with just tips, and then incorporated citizen alerts through the bundle package, so we were able to send out information vital to different geographic areas in the city and alert citizens about isolated incidents of crime or concerns specific to particular communities. We now have tip411 Pro and our own smartphone app that allows us to not only receive tips, but push out information specific to particular crimes, allows us to share crime mapping information, links to important agency information, as well as our social media accounts.

In 2016, our department received 435 unique tips through tip411, and I truly believe that all of the information we’re getting is intelligence that we probably never would have received if people didn’t have the ability to share it with us quickly, safely, and anonymously.

Q: Any notable tips/arrests credited to tip411 that come to mind?
A:Many. One that comes to mind is when we had an individual wanted for armed robbery; we had been searching for him locally for quite a while. We got a tip from an individual who knew where he was and we were able to engage with them on tip411 and obtain additional information, which wasn’t included in the original tip. They were able to give us, down to the room number, where he was staying in a hotel in Louisiana. We gave that information to the US Marshals and they were able to apprehend him immediately. It also aided us in obtaining tactical information which was beneficial to our approach to the wanted person.

Another example occurred when we got information via text about a male at a certain location with a significant amount of marijuana. We got the tip, dispatched it quickly to some of narcotics oriented Patrol Officers, and they found nearly a pound of marijuana in the house.

Q: How do you use your department’s social media accounts with tip411 to help get the word out?
A:We try to get tip411 information out to the public as much as we can to try to maximize its usage by residents and visitors to our area. We use it in virtually every instance in which we ask for the public’s assistance. Even when we use another social media platforms, like Twitter, to shares suspect images, videos, etc., we ask followers to submit information using tip411. It doesn’t matter to our agency if it is a routine retail theft case or a murder investigation, we include that as a resource to the public.

Q: What have you done to brand and promote the tip411 system in Clearwater?
A:We try to feature it prominently on our website and we push it out as I said through Facebook, Twitter, and other forms of social media. In every community alert that we send, we include our tip411 information. We put it on flyers, on crime alerts – just about anything we send to the public.

When we canvass neighborhoods and leave door hangers, our tip411 info is on them. We include it on our business cards, just about anywhere imaginable, so that tip411 is virtually synonymous – in the public’s mind – with the Clearwater Police Department.

Q: So, why tip411?
A: To me, one of the most significant aspects of tip411 is the “loop of communication” it creates, with the anonymous tipping and community alerts working together. Anyone can have what they describe as an “anonymous” tip service, but people are smart and they know if they have to send a tip through their email, that someone could trace it back to them one way or another.

That’s why, prior to tip411, we’ve had very limited success with other types of “anonymous” reporting services, because they know it could be tracked and that causes the public to be reticent to share information.  Our experience is that the public feels comfortable that they are truly anonymous with tip411 and that allows us to not only receive tips and information, but also have an opportunity to build trust and have additional communication with them.

On April 6, 2016 at approximately 7:07 p.m., Hillsborough County Sheriff’s Office (HCSO) deputies received information via tip411 in reference to a suspect selling narcotics at 7023 Himes Avenue North. The comments also stated the suspect was concealing the narcotics in a bleach bottle.