tip411 interviewed Chief Deputy U.S. Marshal Andrew Deserto of the Northern District of Ohio about his experience with our system.  Here’s what he had to say…

Q: Can you tell us about Northern Ohio and the U.S Marshals Service (how many residents, how many sworn, etc.)?
A: We serve 40 counties in the Northern half of the state, covering about 5-6 million people.

The 40 counties we serve cover the cities of Akron, Youngstown, Toledo, and Cleveland, where our four core offices are. We have also expanded our law enforcement capabilities into smaller cities by opening taskforce offices in several locations there as well.

We have 40 full-time deputies and TFO (Taskforce Officers) across the district, with another 200-250 part-time TFOs we can call in when we have a big case.

Q: How did you hear about tip411 or how did it come to your agency?
A: tip411 was something I helped spearhead here.

Our taskforce (Northern Ohio Violent Fugitive Taskforce) started in 2003 and, after it came into effect, we developed a toll-free 1-800 tipline for the taskforce, which has been very effective.

Around 2010, we started really thinking about how we could develop a way to bring in text tips because technology had been changing. You could see the younger generation leaning more toward texting than calling, and we figured it would be nice to offer the public, especially younger people, another avenue to send us information.

We started researching online what was available, and at first thought we could just buy a cell phone, give out the number, and tell people if they had a tip they could text us.

Obviously the problem with that is the tipster could not be anonymous, so I kept searching and came across tip411 and some competitors. I got information from each did some interviews with them about how they work, did some testing, and found tip411 to be very useful. We liked the backend and how we could utilize that, and then it was just about coming up with funding to purchase the system.

The challenge we had was paying for the system up front, but we’re part of Ohio HIDTAand they have simpler funding rules for paying for services so we were able to secure funding through Ohio HIDTA and pay for our tip411 service. 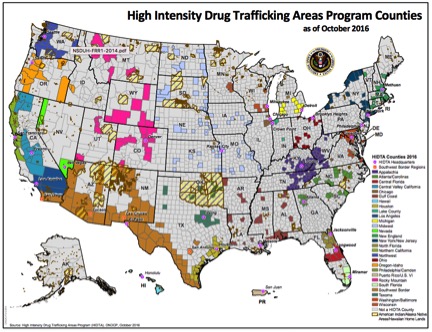 It took us about a year after testing, getting approvals through our chain of command, and getting funding, but our office became the first US Marshals in the country to go live in 2011 and we’ve been with tip411 ever since.

Q: How is tip411 administered in your agency (responsibilities, protocols, etc.)?
A: Another challenge we had was to figure out how to establish this for communications between our people since we aren’t set up like a regular law enforcement office.

We approached one of our partner agencies (the Bath Police Department, a suburb of Akron and Cleveland) and they volunteered to monitor tip411 through their dispatch center 24/7. We don’t have that option here, so they monitor it and make a determination based on the tip if it requires an immediate response or not. No matter what, they forward the tip to our personnel via an email group so everyone is made aware, and they follow up with a phone call to deputies on different teams across our service area if it needs immediate attention.

For all tips, our team gets the email with the information and everyone can view it. Our protocol is that, whomever’s case it is, they respond and let people know it’s their case and will follow up with it. For tips that don’t pertain to an open case, we have a Tip Coordinator who will follow up and connect with local police – this ensures we don’t miss anything.

Q: How has the tip411 system aided your agency in its mission?
A: We’ve had several good examples of arrests from it, but ultimately it’s given us a better connection to the public.

We are the first Marshals office to set this up, but there are many others that have come on board and many have contacted me when they were thinking about it to ask how we’ve done it and how beneficial it is.

So this question comes up a lot… How valuable is it? Is it worth the money? You can’t really put a dollar sign on tip411 because the value of it comes from the many times where we have tipsters that are comfortable sending us a text tip but they definitely would not have picked up the phone and given us that info over the phone. We still get lots of phone tips, but there is this cadre of people who don’t want to talk to us but they feel comfortable typing up a message and giving it to us.

Knowing that we get information from them that we wouldn’t have gotten any other way provides value in itself. We’ve had tipsters that have said, “do not call me, I don’t want to talk to anyone, but here’s XYZ info”

Based on that, we know it’s valuable and that we need it.

Q: Any notable tips/arrests credited to tip411 that come to mind?
A: Last June, we had a fugitive who was an escapee that we were looking for with firearms charges. We highlighted him as our fugitive of the week and last August we received a text tip that he was staying at a residence in Akron. Our staff responded and arrested him the next day.

Another was a rape and kidnapping suspect out of Cleveland in 2013. Lakewood Police wanted him on rape and kidnapping of a child under age 14 and we ended up getting an anonymous tip that he was hiding at a residence in Cleveland. Staffs responded, found him hiding in a closet, and were able to apprehend him.

Q: What have you done to promote your tip411 system to make sure residents know about it and use it?
A: We’re very integrated with the media in the district and do a lot to publicize our fugitives.

Our whole use is for fugitives, unlike many police department who are looking for any crime related info.

In our district, we have multiple media outlets that we partner with in each of our different areas. In Toledo, we do a fugitive of the week and Toledo’s Most Wanted in their local paper with 25 fugitives in it every week. Mansfield and Youngstown do the same thing in their papers. Here in Cleveland, we do most wanted on TV.

In every area, we’re putting fugitives out on a weekly basis.

Beyond that, if we have a big case going on, we publicize that separately.

We also share a district wide “Dangerous Dozen” which we update quarterly to post on our website as well as the “Agonizing 8” Most Wanted Sex Offenders. 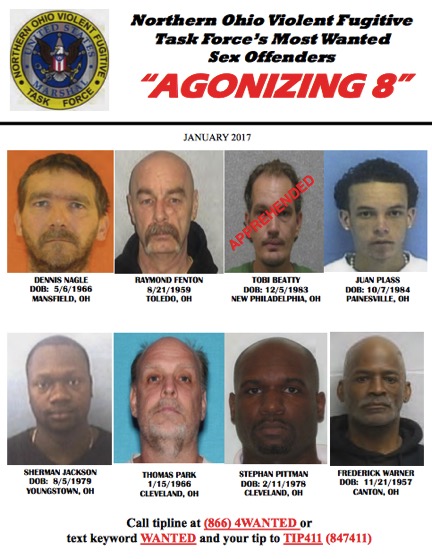 In all of this information we put out, we always have our phone number and the tip411 text number with keyword “WANTED” publicized with the fugitive(s), what they’re wanted for, and how to contact us. It’s in print, on the news, and on our website.

On our website we also have a “submit a tip” button for web tips as well.

Every time we make an arrest of a fugitive we publicize it with a press release and in that press release template we have verbiage in it to reiterate language about tip411 and using it to share whatever information people may have.

We’re constantly feeding it out there and what we’ve found is that, for tip411, it’s the printed flyers and notices in the newspapers that help us get the most tips. Seeing the tip411 anonymous text info in front of them they can read it and not need to remember it and they can share information right then.

Q: Any advice for other agencies using or considering tip411?
A: I’ve had this question come up for sure from other Marshals Services. We think it’s a good value for the money. The system is very user friendly and its effective.

The best advice we can give is that it’s only as good as you publicize it. If you don’t put the tip411 number out, you won’t get anything back. You need to publicize it a lot to get the tips and get the value out of it.

For police departments that I’ve seen in our area that have adopted it since they saw us using it, we think it’s an even better value because they can put flyers in schools with the number; they can do a lot with it, the sky is the limit for them.

For us it comes down to it being another tool for the public to use with us and we’ve had success and will continue to use it.