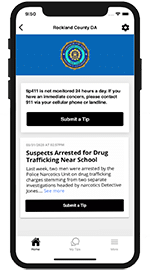 “I want to commend the excellent teamwork between the Rockland County District Attorney’s Drug Task Force and the Orangetown Police Department in apprehending the alleged suspect. The use of the TIP411 hotline and the immediate investigation and arrest show how important these tools are for combating crime in our community.” said District Attorney Walsh. Darryl Wright was processed at the Orangetown Police Department and arraigned virtually in the Town of Orangetown Justice Court.

The arrest warrant was a result of an investigation by the Rockland County Drug Task Force with assistance from the Orangetown Police Department, in response to complaints from the community regarding open air drug transactions in the Pearl River area. Complaints from the community were made to both the Orangetown Police Department and the District Attorney’s RocklandCo DA mobile app.

Read the full story from RocklandReport.com