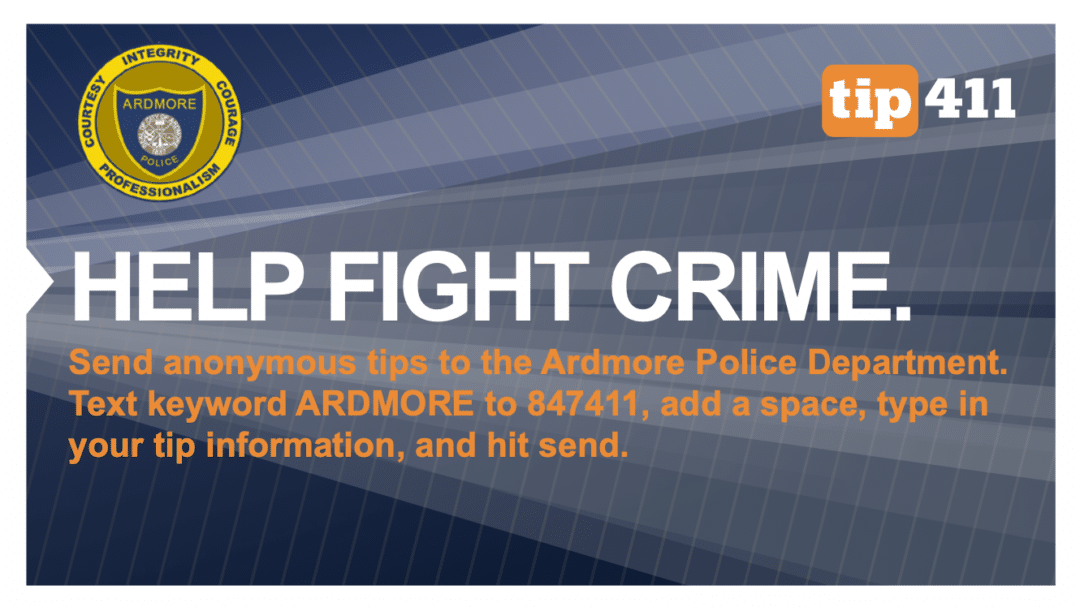 The Ardmore Police Department has launched an anonymous tip and alert system to help police better connect with the public.

The new Ardmore PD app, developed by tip411, enables the public to share 100% anonymous tips with police and will help community members of all ages find information and view real-time alerts.

Ardmore Police Deputy Chief Kevin Norris said the app has been shown to be widely successful for other departments in areas across the country, and the Ardmore Police Department believes it will greatly enhance its ability to engage with the community and fight crime.

With the new app, Norris said the department will be able to send alerts out to the public much faster, and ultimately enhance the quality of life for the community. “With this, I can type it in, I can send the alert and within seconds it can hit hundreds, if not thousands, of people,” Norris said.

Citizens will be able to receive notifications when there are dangerous flooding conditions or major road closures and, in certain circumstances, when there might be crime sprees in their area.

“I think if we send an alert that says ‘Hey, in this area we are having a lot of car burglaries, check your locks, take your belongings out of your cars and we send that out, I think that will help,” Norris said. “Because at that moment somebody can go out and lock their car.”

The Ardmore Fire Department and dispatchers will also be involved in sending out alerts.

In addition to informing the community, Norris said the app is expected to help Ardmore police with investigations. Many people are wary of sending in anonymous tips over a phone call, and the app provides a new way for individuals to communicate with police.

Individuals can share tips, as well as videos and pictures via the app, and officers can respond back to create an anonymous two-way conversation. Norris said anonymous tips give police leads in investigations, and Ardmore police have solved many major crimes with a tip.

“Sometimes all we need is a bread crumb and that bread crumb leads us to bigger and better things. That’s what we’re hopeful for,” Norris said. “We’re hopeful that people who may be fearful of calling or coming in person, that they could give us tips so that we could further our investigation and be able to submit the reports with better cases to the district attorney’s office.” Norris said the department can only see how many people have downloaded the app, but no personal information or identification is shared. Individuals will still need to call 911 in emergency situations and report crimes.

The app is free to download on the Google Play or iTunes App Stores and can be found by searching “Ardmore PD.” The app can also be accessed by visiting the department’s website at www.ardmorecity.org/137/Police.

Those without a smartphone can share information with police by sending an anonymous text tip via their cell phone to 847411 with the keyword “ARDMORE.” Anonymous tips can also be submitted via the department’s website.

“The Ardmore Police Department is committed to providing professional police services through community cooperation, creating realistic solutions to problems, maintaining respect for individuals’ rights and enhancing the quality of life for the community,” Norris said. “We believe our new Ardmore PD app from tip411 will help greatly enhance our ability to deliver on that mission by engaging our community to help fight crime.”