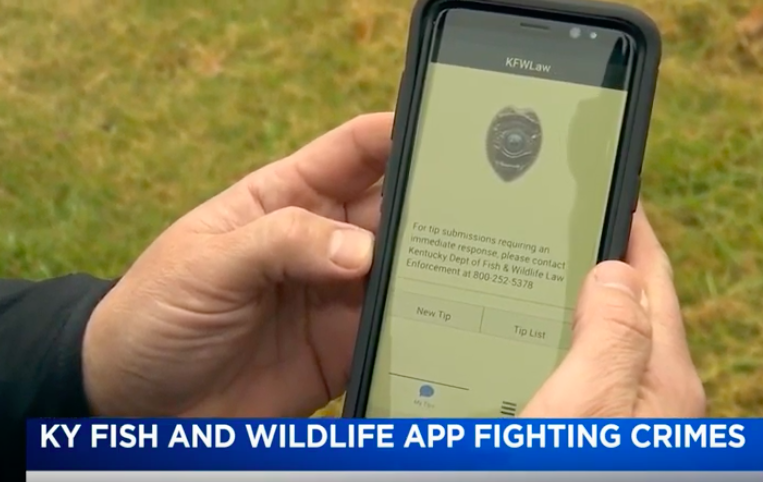 The Kentucky Department of Fish and Wildlife Resources is using a new tool to fight crimes.

“Up to this point we’ve received about 100 tips and about 1,000 downloads of the app,” said Kentucky Department of Fish and Wildlife Resources Chief Communications Officer Kevin Kelly.

When you open the app and select the “new tip” option, you can then write in a subject line, description and fill in the location. You can even take a photo or video to send in showing conservation officers what you’re seeing.

“We’ve received complaints about trespassing, we’ve also received tips about hunters taking more than one buck, so we have a one buck rule here in Kentucky. And then also harvesting deer from roadways which is not allowed,” said Kelly.

Modern gun deer hunting season just began in Kentucky, and officials also want to remind people that it’s illegal to bring deer or elk carcasses across state lines. The reason behind that rule is to prevent the spread of disease.

If you see someone driving carcasses into Kentucky from out-of-state, you can report that through the app too.

LEX 18 talked with a local hunter who said it sometimes can be hard to get in touch with a conservation officer or game warden, and he thinks this is a big step in the right direction.

“Say if someone’s doing something wrong you could just be like ‘hey you might want to come check this out.’ I just think it’d be a great idea,” said Colby Brown from Rockcastle County.

The KFWLaw app is available for download in the iTunes App Store or Google Play Store.

The app is free, and once you have it open, select “new tip” on the app home screen to send in information.

Read the full story from LEX18.com