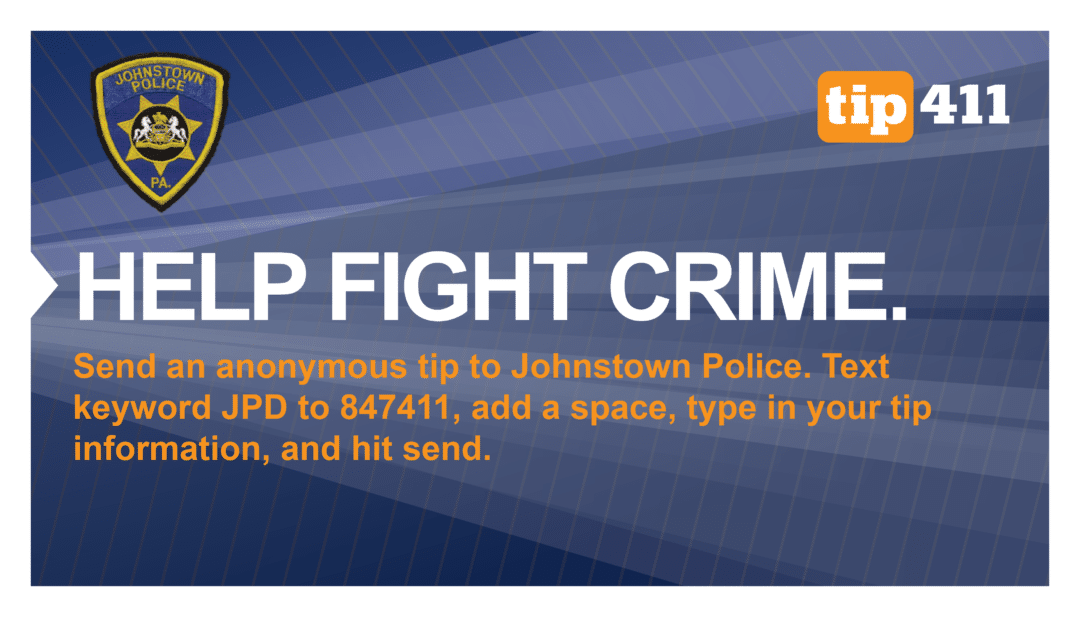 Tips to and from Johnstown Police Department are now just a click away.

Through a program developed by Minnesota-based CitizenObserver, Johnstown police are launching Tip411 – an interactive alert system “app” that enables both the police and public to alert one another about important public safety issues, police Captain Chad Miller said.

Options such as Push Out the Pusher and the department’s Facebook page have been valuable for tips, Miller said, but people are more comfortable sending a text or photo than leaving a telephone message or identifying themselves on social media.

Because Tip411’s program software doesn’t collect IP addresses, phone numbers or any other identifiers, police only receive messages – unless a tipster decides to offer that information, the company’s creators said.

“We believe an informed community is a safer community,” Miller said.

Johnstown Police serve the city, Dale Borough, Middle Taylor and West Taylor townships. Through the downloadable “app” – or an anonymous text to “tip411” (847-411) – residents can quickly and anonymously send officers tips on unsolved crimes or report drug deals and other suspicious activity in their neighborhoods.

Johnstown Police, meanwhile, can respond to those messages – and post their own “alerts” about incidents such as missing person cases.

Back then, the New Jersey department was dealing with a common trend, striving to solve a surging number of street crimes while tips from the public through 911 seemed to be dwindling, police said at the time.

By turning to a third party vendor to manage the system, an environment was developed through Tip411 “for those who want to report a crime to be able to do it without being identified,” Fair told The Tribune-Democrat on Wednesday.

“We’ve had people send us messages, pictures and video that have been valuable to our investigations,” he said. “And because of the way the message is collected and delivered (to the department), we don’t know who sent it,” he said.

Cincinnati Police Department used its app to notify the public about a missing 60-year-old man with dementia on Monday. A few days earlier, police reached out to the public to help them identify suspects in a city robbery.

In Johnstown, people interested in receiving updates can download the app on both Android and iPhone devices. Links for both phones are provided at www.tip411.com/agencies/johnstownpapd/groups/22072through icons on the left hand side of the page.

People can also text the department by messaging 847-411 with the abbreviation “JPD” in front of the message.

A “tip” link has also been added to the department’s webpage, www.cityofjohnstownpa.net/police

Miller said the program is not meant to replace 911.

Incidents and emergencies such as injuries, vehicle accidents and crimes in progress should be reported directly to 911, he said.

“This isn’t always going to be a 24-7 monitored line. If something occurs that requires immediate assistance, call 911,” Miller said. “What we’re looking for (through tip411) is tips to crimes already committed.”

Johnstown Police are the first department in the region to add the tip411 system.

“We’re trying to lead the way here, when it comes to the way policing is heading in the 21st century,” Miller said.