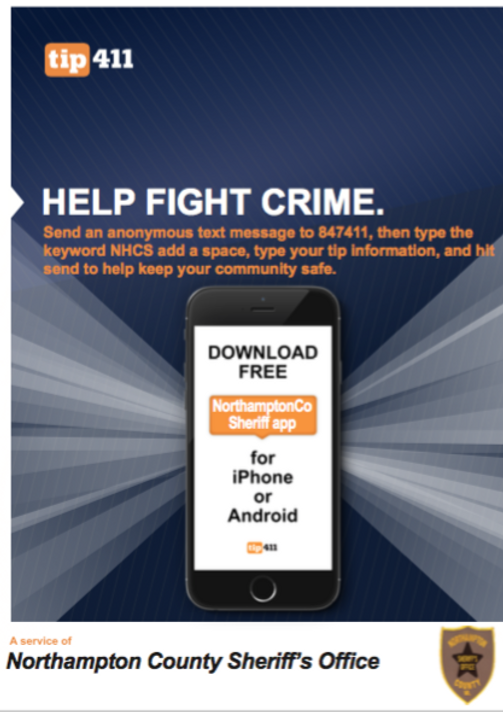 A new app alerts Northampton residents to crimes or other incidents — and it also allows users to send in crime tips or report unusual activity to the Sheriff’s Office anonymously.

“We are working every day to continue to strengthen our relationship with the community,” said Doughty, adding, “It has been my mission since day one as your sheriff to make Northampton County as safe as it can be.”

The app is “a great way for our citizens to become involved with helping us make Northampton County a safe place to live, work, play and raise our families,” Doughty said.

The free app can be downloaded from Apple’s App Store or the Google Play Store by searching Northampton Sheriff.

Residents also can send tips from a computer or tablet by going to http://www.tip411.com/agencies/northamptoncosheriff/groups/21736

The app is not intended to replace calling 911 or to be used in emergencies.

The Sheriff’s Office also has partnered with the county school district to provide the app to enable students to send anonymous tips to school resource officers, school administrators, or other authorized personnel.

“The app will give students a way to anonymously communicate with school officials and law enforcement on issues that pose a threat to the safety of their fellow students, teachers and staff,” according to the release.

Read the full story from the Salisbury Daily Times